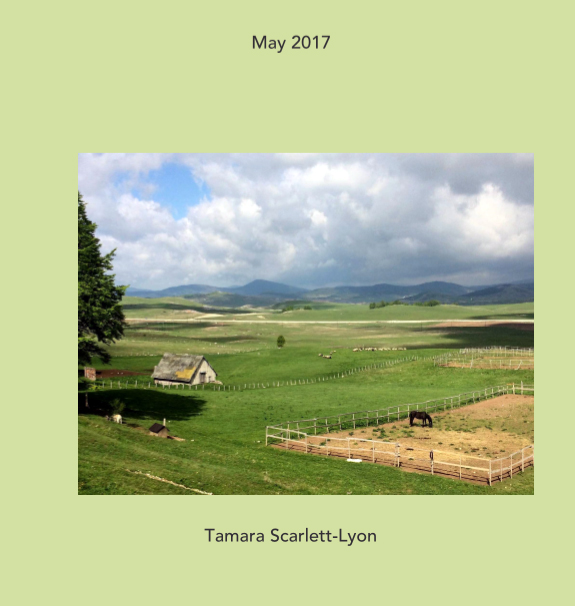 “Jim’s mountain biking adventure
Jim was on Balkan time again. The ride that Zoran said would take 3-4 hours took
almost 7. Jim returned at about 4:30, muddy but happy. He liked Zoran a lot, and the
next day in response to Zoran’s posts about the ride on Facebook a journalist from Blic
newspaper wrote up a story about Jim, Zoran and the ride, complete with a photo of a
happy looking Jim in his bike clothes. Not everything in the article is exactly accurate,
but we were tickled for Jim to have a few minutes of Serbian fame.
A new friend who moved from Serbia to Seattle about 15 years ago translated the
article for us
“American Fascinated with Gucevo
James Scarlett-Lyon (61), music professor and world traveler on the bicycle was
fascinated with Gucevo mountain and area around Loznica where his wife’s roots are.
He learned about Gucevo bike trail from one American mountaiun biking site, The site
had information provided by Zoran Bogicevic, the president of the mountaineering and
biking club ‘Biciklo’. As James was already visiting Podrinje area, he decided to check
the trail that attracted his attention. His host from Loznica helped fulfill Jame’s
curiosity. ‘He is a world traveler and wherever he is, he is hiking, biking or running with
his fellow bikers and hikers. Zoran tried to show his guest as many interesting places as
possible and to teach him Serbian glorious past. James was carefully listening about
Gucevo battle from the Big War (note- WW I). He saw where the front lines and filed
hospital were. James was excited to meet lumberjacks pulling lumber with the help of
their horses as well as to meet the group of bee keepers. On the way to Tronosa James
came to the edge of Boranija. He was amazed with the nature. James said, ‘this was a
wonderful day. The trail is very good, view is great and I met so many people’.”